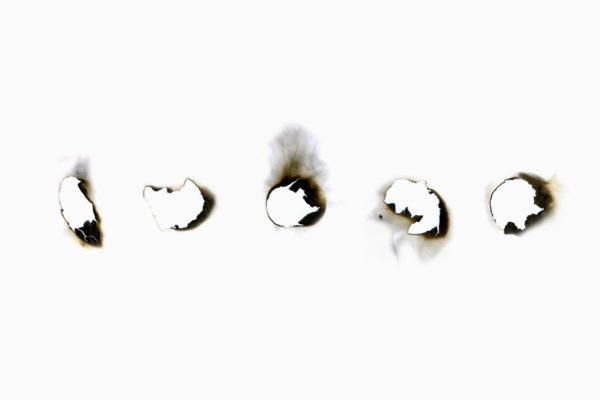 The Alain Margaron gallery is exhibiting eight large monotypes by Édith Dufaux on the street side. Their size and verticality give them a human dimension. They evoke psychic self-portraits as much as fragments of nature that seem to go on forever, mosaics of bark and fragmented stones, parietal vegetation, lichen, a few muted colors of dead leaves, streaks of rust, a long scar on a trunk.

As close as possible to her experience, Edith Dufaux does not give in to the overly direct complacency of a therapeutic expressionism that leaves little freedom of interpretation to the viewer.

She transposes her interior universe to let us enter the slow tempo of the mineral, the wood, the vegetation which escapes the rhythm of the seasons. Time is suspended, but with rope ladders to cross the verticality of seemingly endless wall fragments.

The long process of elaboration of her works, in particular her choice of the monotype, a difficult technique which obliges to conceive the work in reverse, participates in the distancing of Édith Dufaux with regard to her personal history, without cutting the thread.

"I have the sensation of discovering what I myself have buried, like an archaeological dig."

At once paintings, drawings, sculptures, these oil monotypes are life experiences, a space-time.

The name of Hélion (1904-1987) is well known, but his work is still poorly understood, despite his numerous writings, of great clarity, to explain the coherence of a singular approach, straddling abstraction and figuration, sometimes rather on one side, sometimes rather on the other. His work is totally abstract only from 1930 to 1932. His figurative paintings and drawings are carried by the writing he forged during his years of abstraction, whether geometric or premonitory of a return to figuration.

In spite of numerous retrospectives, one can still be baffled by this work, not grasping its coherence and quiet strength, especially since the subjects are often prosaic.

Who better than this painter knew how to express the strength of an apparently ordinary subject? What could be more banal than what could be summarized as a cabbage in a maid's room, flowers cluttered with green foliage, a pumpkin, a woman bending over, a puddle of water or a crumpled paper? One can easily pass by such works without paying sufficient attention to them. But if we stop to look at them, our relationship to the world changes.

His work catches us, teaches us to see, to apprehend reality and to understand it. She transforms the banality of everyday life into something marvelous, elevating it, according to her own expression, to the level of a myth, and is as much about making us see as about seeing.

The more one looks, the more one is seized by the depth of his coherence, between his abstraction of the 30s, his constructed figuration of the 40s, his thorough examination of reality at the beginning of the 50s, then the capture of reality in touches that join the lyrical abstraction of his friend Hartung, finally a fusion of all these abstract, figurative, precise, conceptual ways, for an approach to life and the world more and more complex which is as much a meditation on painting and all its possibilities as a capture of lived or observed scenes.

From 1980 to 1983, he was not far from complete blindness. His exceptional mastery of painting and the conceptual foundation of his approach allow him to create works of great richness

Visit of the Édith Dufaux’s exhibition with the artist

Since 1993, we have developed two spaces in the same building. One is open to the street. The other, more intimate, allows you to discover, as if at home, the works on the walls or available in our reserves.

The gallery always works on a "first market" basis: it regularly organizes individual exhibitions, of about thirty or forty works, as part of a long-term policy of valorization.

We publish books and catalogs on each of our artists, sometimes in collaboration with institutions. And we send out weekly newsletters.

Except recently for a few emerging artists, we buy in advance all the works we show. This allows us to help the artists, to preserve our autonomy of choice with respect to the trends of the moment and to make a rigorous selection.

In a large majority of cases, these works have been acquired directly from the artists, or their beneficiaries.

We were the last gallery of Macréau, Dado, Fred Deux, Laubiès, Groborne, Duvillier, during their lifetime. And it is in collaboration with their families that we represent Boix-Vives, Lunven, Hélion and Bernard Réquichot, whose collection Daniel Cordier passed on to us in 2016. We continue to show regularly the latest works of Hong Insook and Edith Dufaux and remain very attentive to the creation of young artists.

The Centre Pompidou and the Museum of Modern Art regularly exhibit works by most of our artists (Bernard Réquichot, Helion, Fred Deux, Dado, Lunven, Music, Laubiès...).