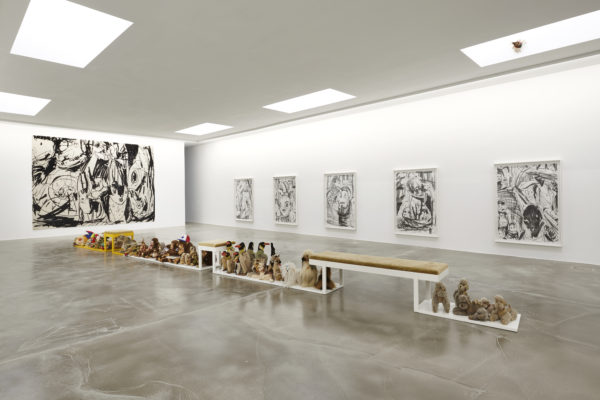 Throughout a path, many things can arise and these things can often be important in our lives or not. They can continue to be just things. From this thought came up my new series entitled “The Sense of Things” which presents a trajectory that begins in a research of materials and develops in a tangle of tubes that dictate the direction of the work. Unlike the series already presented during my career, where I create concepts and from there I dictate the progress of the artworks, in this project the material, in this case the tubes, is what dictates the paths that will be built.

And why the tubes? These appeared accidentally when I received an order for an object that ended up being built by water pipes. From then on, the desire to experiment with the material in other ways arose in me, including painting. As the tubes began to take different shapes on canvases or objects, it became increasingly complex to name what each work represented, so I began to call them “things” in a generic but specific view of each case, as we can notice in the titles I created for each work.

In fact, the word thing is present in everyone's life exactly as it is treated in this new artwork of mine: many times, we don't know what it is, what we feel, where, when, for what, and we end up naming it “thing”. This indefinite-definition of something ends up amplifying its meaning, when for each person it means some-thing different.

Ricardo Fernandes Gallery focuses on presenting contemporary art from around the world to the market.

It is an ongoing effort of more than twenty-five years, beginning with the inauguration of the first gallery in Brazil and then an international career in which Ricardo Fernandes is actively involved in the promotion of recognised international artists.

The Gallery is part of an extremely dynamic and resolutely cosmopolitan environment that reinforces its international and artistic value.Ricardo Fernandes organizes various forms of visual arts exhibitions (painting, sculpture, photography, installations, etc.) and promotes and supports a wide variety of contemporary artistic expressions.

Through its constant support of international artists and its involvement in the development of a rapidly expanding international market, Ricardo Fernandes Gallery actively participates in the diversity and artistic and cultural interaction of the city of Paris.